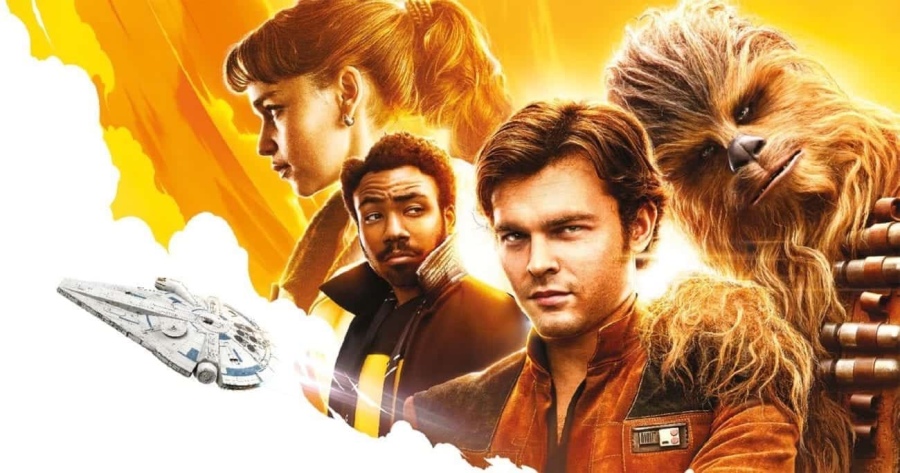 Hello everyone! Leading up to Star Wars Episode IX, I am rewatching and reviewing as many Star Wars movies as I can before December 19th. Once I’ve finished I’ll give my ranking of all 10 live action Star Wars movies. Today I’ll be looking at Solo: A Star Wars Story

The movie was exciting, from the beginning chase on Corellia to the ending confrontation with Paul Bettany, the whole movie is packed with action and adventure. I also think that explaining Han Solo’s backstory in a heist movie really works.

One of my favorite things about this movie is the Characters’ chemistry and the casting. Donald Glover is perfectly cast as the charismatic Lando Calrissian, and he has great chemistry and banter with Alden Ehrenreich as Han Solo. I’ve always enjoyed Woody Harrelson as a mentor character, and we get to see him as that here again. I wouldn’t have thought that having Paul Bettany as a villain would work, but it does. He’s ruthless, menacing, and he leaves you wanting to see more. We even get John Favreau as the voice for an alien character. I also think that Alden Ehrenreich and Emilia Clarke had great chemistry with each other. At times Han seems a little bit too naive and impressionable, but it’s clear that there’s more of his story to be told between the end of Solo and the beginning of A New Hope.

Contrast to other Star Wars Movies

It feels like the same Universe that we’ve known since 1977, but It doesn’t have the same tone as the other films. I think that giving this movie a different tone than the Skywalker Saga helps portray how Han is different from other characters and helps paint him as a sort of outcast in the Star Wars universe. It also allowed them to make Solo a heist movie, which is perfect for demonstrating the life of a smuggler.

We get to see so much in this movie. We’ve heard Han and Chewie make offhand remarks about their past in the Original Trilogy, and now we’re seeing it all come to life. I think that it all works really well, but I think that they should have saved a little bit for a future Han Solo story. What I think can end up happening is watching the Original trilogy and asking “why do they only make references to events that happened during this one tiny section of Han’s life”? If anything, I think they might have over-tied it to the original trilogy.

I love the Heist-feeling of the movie, but there were so many parts of this movie that are really forgettable. The Characters and plot points are so forgettable that when I was rewatching the movie, it legitimately felt like I was watching it for the first time. I must have said “oh! I forgot that _____ was in this movie” about 20 times. I think that this is possibly because they tried to make the whole movie tie in to quotes from the original trilogy, which I mentioned earlier under Fan Service.

Level 24. I grew up playing video games and adopted Tabletop games later on. Add me on PSN, XBOX Live, and Nintendo Online. I'm always up for new games and I’d love your suggestions! View all posts by James Soler

This is a text widget, which allows you to add text or HTML to your sidebar. You can use them to display text, links, images, HTML, or a combination of these. Edit them in the Widget section of the Customizer.